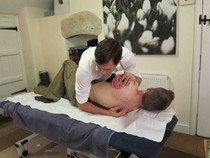 Osteopaths are governed by the General Osteopathic Council who define osteopathy as:

"...a way of detecting and treating damaged parts of the body such as muscles, ligaments, nerves and joints. When the body is balanced and efficient, just like a well tuned engine, it will function with the minimum of wear and tear, leaving more energy for living."  Osteopathy recognises that much of the pain and disability we suffer stems from abnormalities in our body's structure and function.     Osteopaths diagnose and treat problems with muscles, ligaments, nerves and joints to help the body's natural healing ability.   Treatment involves gentle, manual techniques - easing pain, reducing swelling and improving mobility.  Often, this involves manipulation which can result in an audible 'crack' which is simply the sound of gas bubbles popping in the fluid of the joints.   Osteopathy does not involve the use of drugs or surgery."

These are the eight major principles of osteopathy and are widely taught throughout the international osteopathic community.

The body is a unit.

Structure and function are reciprocally inter-related.

The body has the inherent capacity to defend and repair itself.

When the normal adaptability is disrupted, or when environmental changes overcome the body's capacity for self maintenance, disease may ensue.

The movement of body fluids is essential to the maintenance of health.

The nerves play a crucial part in controlling the fluids of the body.

There are somatic components to disease that are not only manifestations of disease, but also are factors that contribute to maintenance of the disease state.

These principles are not held by osteopathic physicians to be empirical laws; they are thought to be the underpinnings of the osteopathic philosophy on health and disease

A Brief History of Osteopathy

Osteopathy was founded in the late 1880′s by Dr Andrew Taylor Still.

Who was Andrew Taylor Still?

Dr Andrew Taylor Still was a 'doctor of the people', a Christian who retained an independent nature characteristic of the frontier people of the United States of America. He was apprenticed to his father, a country doctor and a Methodist Minister, for a number of years before branching out on his own. His rejection of traditional medical treatment in those days arose from the death of three of his children from Meningitis, and his feelings of inadequacy and helplessness to do anything to help them survive. Still concluded that the orthodox medical practices of his day were frequently ineffective and sometimes harmful, such as using mercury chloride, arsenic, strychnine and antimony in medical procedures. Still devoted the next ten years of his life to studying the human body and finding better ways to treat disease.

What was unique about his ideas to health?

Still's ideas centered on how our body's systems are interrelated and dependent upon one another for good health, and were revolutionary at that time. More than this, he thought that he had stumbled upon a unique causation of disease – that 'bones out of place' could damage blood and nerve supply hence causing illness.

His research and clinical observations led him to believe that the musculo-skeletal system contained all the elements needed to restore health, if properly stimulated. By correcting problems in the body's structure by manual techniques, the body's ability to function and heal itself could be greatly improved. He also promoted preventative medicine and endorsed the philosophy that Osteopaths should treat the whole patient not just the disease.

When was the first School of Osteopathy founded?

By 1890 Still's fame had spread so widely that Kirksville, Missouri became a place of healing, with people travelling hundreds of miles to seek his help. The railroad company was even forced to lay on more trains to cope with the ever-increasing demand. In 1892 he opened the first Osteopathic medical school with the help of William Smith, an Edinburgh medical school graduate. By 1897 Smith had secured standards of training equal to those found in US medical schools and Osteopaths were registered as independent medical practitioners by the state legislature. By the beginning of the twentieth century, there were 4,000 osteopaths, over 10 schools and 17 states had recognised them as physicians and surgeons. Through the succeeding decades, what started as an alternative medical cult became a successful profession and by 1930 Osteopathy accepted the materia medica as part of their training and treatment. My grandfather Johnnie Johnson studied and qualified at Kirksville in the early 1930's.

Where are the Osteopathic Schools?

Get the latest news from the field of osteopathy.